Since graduating, I’ve been trying to save the extra dollar here and there and shop a little smarter. Therefore, I’ve been finding the poor man’s treasures of those expensive brands and stores we all love so you don’t have to break the bank.

Okay, obviously this would be at the top of the list. Trader Joes is the Poor Man’s Whole Foods. Whole Foods is quite the beautiful place but could be equated to Disneyland- it makes your wallet cry as soon as you cross the thresh hold. Whole Foods carries a wide variety of every imaginable health food trend you could possibly imagine (even vegan cheese and egg white pasta…) so it’s the ideal place for those with dietary restrictions. Need something gluten free? Whole Foods has you covered everywhere from muffins to soup. Need something dairy free? There’s something without a touch of creaminess in every aisle. Then you get to the register and $70+ registers on the screen and you have about five items on the conveyor belt. Enter Trader Joes- throughout my college years I learned that this is the ultimate mecca for those that want to eat healthy on a budget. Honestly the most expensive thing in the store is quinoa, but that’s probably one of the easier grains to make last (it’s similar to how you never quite seem to run out of rice). Trader Joes has been recently introducing a lot more gluten free and dairy free options which, coupled with their decent variety of produce, easily makes Trader Joes the perfect trade off to Whole Foods. Now they just need to add smoothie bars and maple vegan doughnuts and I would never enter another Whole Foods again.

Quick gear shift from food to work out gear- which in the world of money basically costs the same when you’re shopping for quality. Nike, the marketing genius of work out clothes in the 21st century, has created an excellent brand that prides itself with great quality and the ability to make you think you’ll look like a professional athlete in absolutely all things Nike. Realistically, $45 for a tank top that you’ll primarily be sweating in doesn’t seem realistic. Work out clothes can get tricky when you begin to compromise quality for price. Here’s where Under Amour comes in. I stand firm in my belief that Under Armour is the Poor Man’s Nike. As a former competitive athlete who has done a lot of work in and out of the gym, Under Armour holds up incredibly well given the inexpensive price tag. Just compare full length Nike tights at $98 to Under Armour’s price tag of $35 and hear the money literally pouring into your wallet. Under Armour holds up just as well as Nike, if not better in some cases, with their moisture wicking fabrics, durability and fit of their spandex, and support of their sports bras. So even though Nike has made it out to seem as though all the cool kids wear Nike and you’ll be cool too if you wear it- sometimes it’s worth saving the money and going Under Armour if that means you can afford the gym membership to go with the work out clothes.

Incredibly underrated, Fossil crafts the best accessories. Maybe I’m partially  biased due to the fact that I own two Fossil watches, three Fossil bracelets, and a Fossil wallet, BUT here’s the point: Fossil is the Poor Man’s Michael Kors. I recently bought myself a black leather Michael Kors over the shoulder bag and had to drop some serious cash and essentially make an investment. On a purse. In contrast, I bought my quality leather wallet at Fossil for a mere $30- about 1/3 of the price of any Michael Kors wallet on the market. Fossil leather is the best you can get for the least amount of money without having to up your target brand. I haven’t even gotten to the best part- Fossil and Michael Kors share the same watch manufacturer. So really, when you pay the $200+ price tag for the gold Michael Kors watch, just know that while I’m typing this I’m wearing a gold Fossil watch made by the same manufacturer standards for less than half the price.

Another hidden gem I found while in college. Hulu is Poor Man’s cable. Easily. Cable is so expensive it seriously makes me wonder why people even bother to spend the extra cash to watch their favorite shows especially when everything is online. If you can handle not being dominated by the “When do we want it? Now!” culture, then Hulu is probably the best $8 you’ll ever spend. Instead of paying an upwards of $60 for cable, you can pay $8 to watch all the shows you’ve ever wanted, one day later than all your friends who seem to have money trees in their backyards. My only pro tip is to avoid social media, because spoilers.

Target is Poor Man’s everything. Ignore the fact that every time you go into Target you’ll always end up spending 150% more than you anticipated, rationalizing that everything you bought you “need” instead of “want”- but besides that you and I both know that Target is the mecca of justifiable quality for an inexpensive price tag. Especially the clearance section. 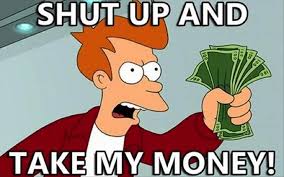